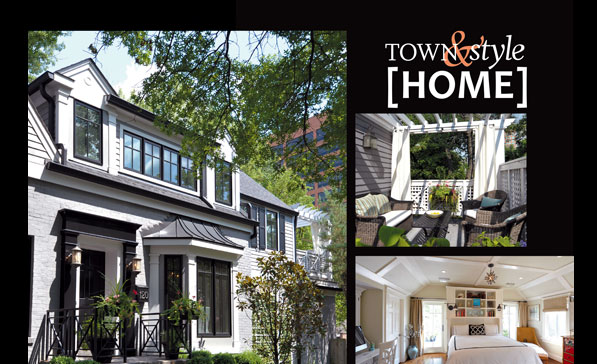 WHEN IT COMES TO DREAM HOMES, bigger isn’t necessarily better. Just ask Michael Rechan, founder of Michael Lauren Development. His own Clayton home is custom-built to be ‘rightsized,’ and it has provided for his family’s every need in a tidy 3,150-square-foot package. Rechan, whose firm is considered one of the leading custom builders in the central corridor, says the only way to really meet the homeowner’s needs is through custom design, which ensures that each variable is controlled by the builder, the architect and the homeowner in collaboration. “There is an almost Zen or feng shui feeling when a client ends up with exactly the home they desire, one that fits them like a custom-tailored suit versus something off the rack,” says Rechan.

One way to understand the concept of rightsizing, according to architect Paul Doerner of The Lawrence Group, is to think of it as reformatting space to make everyday living easier. Doerner worked on Rechan’s renovation and says that, although compact, the home now flows well. “By taking down walls on the ground floor, all the rooms feel bigger because they borrow space from a previously walled-off adjacent room,” says Doerner. “Now the family has the spaces they really need and use, rather than spaces for ‘show’ that are rarely used.”

Unlike most traditional homes, Rechan’s does not include formal dining and living rooms, spaces that have become less essential to homeowners. This highlights a key concept of rightsizing: simply eliminating frivolous, unused rooms to provide space more configured to today’s lifestyle. “The concept of rightsizing transcends the traditional preset floor plan schemes that have dominated residential architecture for too long, and instead focuses on delivering a custom home that exactly meets the homeowner’s needs and desires,” Rechan explains.

Looking at how rooms can multitask is another way to rightsize, he says. In his home, an upper sitting room is just off the master bedroom. It has a door for privacy, which allows the sitting room to remain part of the master suite, but because it is also the upper-level hub of activity, it is still easily accessed from the other bedrooms and used by the entire family. “We use this room as a family room in the evenings, for watching TV and reading, as a coffee bar in the mornings, a home office during the day, and for doing laundry,” says Rechan. “We were able to accomplish all of that and still have the room be among the most elegant in the home.”

The most important thing, says Rechan, is knowing how to create gathering areas so that a modest-sized home feels spacious, with plenty of light and space to move around in. “Our home lives extremely large as there are many interior and exterior gathering areas to find solitude if you seek that out,” he says. “Even though it’s a smaller home, the stairway widths and walkways between rooms are generous, and all the rooms on the upper level are vaulted. We also have a generous number of windows so the rooms do not feel boxed in.”

Although rightsizing is not a new idea, it is a fitting concept for today’s economic and environmental realities, the two experts agree. “Everybody is thinking about houses a little differently,” Doerner says. “The traditional family that we associate with the ‘50s isn’t as much of a demographic force now as it was then. So everybody’s looking at the houses to address the way we live in comparison to previous owners. It seems like a fairly common American trait to say, I want the house to adapt to me, rather than me adapting to the house.”